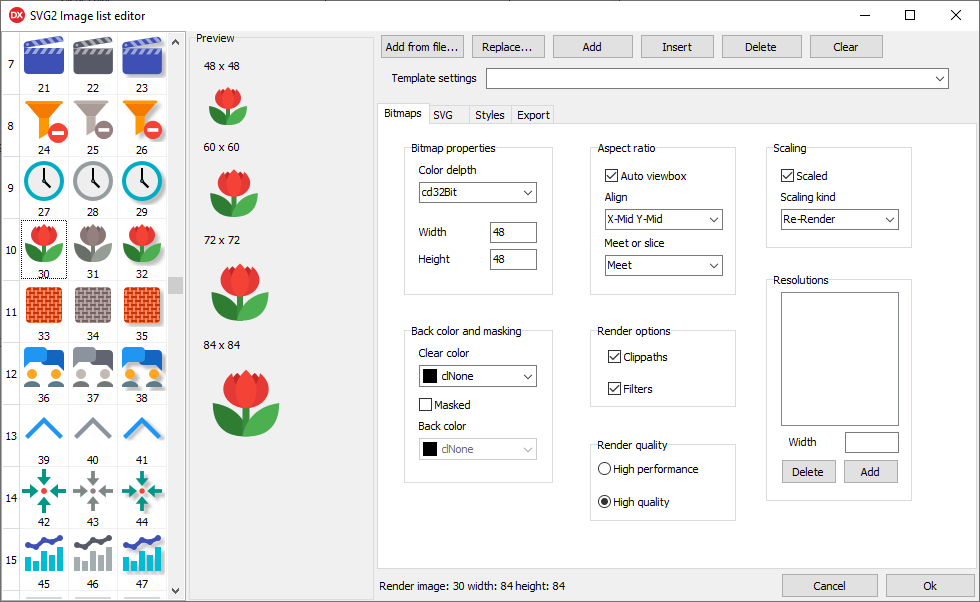 In update 4 of the package, new functionality is added to the SVG image list to increase the number of images that can be created and also more options for exporting and linking to controls.

The SVG image list extends the functionality of the normal TImageList, in that it can automatically create all the images needed out of a list of scalable vector graphics.

So the number of images that can now be created with an SVG image list is:

In the component editor, that is shown in the image above, the SVG’s and Styles are laid out in a grid.

How the resolutions are managed depend for a large part on the base TImagelist for Delphi VCL, FMX or Lazarus, from which the SVG image list is derived:

The SVG image list will render all images on all resolutions that are defined on the base TImageList. For VCL the resolutions can be defined with an extra list of resolutions or rendered “on demand”. See the online help for details.

The SVG image list has two means for modifying the SVG:

On the Style page of the SVG image list, there are some default settings for “Outer SVG” available, for example a “Saturation” filter to apply a “Disabled” look, or a “Drop shadow” effect.

The other method requires a bit more work. For this you need to edit the original SVG. The image below shows some variations on a single SVG that can be created with this method. A example how to do this can be found in the online help.

Some components and controls have several properties that can link to an image list depending on the state of the images, for example a TActionManager has four properties: Images, DisabledImages, LargeImages and LargeDisabledImages.

So we may want to have all the SVG’s and Styles in a central place but also link to these four separate properties of the TActionmanager. This can be done by using the “SVG Linked image list” as an intermediate.

An example is shown below. This is the VCL demo viewer application, it has a central SVG image list with two styles, one for normal images and one for disabled images.

The SVG image list has the capability to create bitmap images from SVG’s. This only happens when SVG’s are added to the list or certain properties of the image list are changed, for example the “Width” or “Height”, otherwise it just behaves as a normal image list.

So it only makes sense to use a SVG image list, if you actually need to render images in runtime, otherwise you might as well use a normal TImageList in your application, because of course, the SVG rendering software is complex and if you don’t use it in your application it is basically dead weight.

So another use of the SVG image list is just to produce images that you export and subsequently import in a normal image list. The SVG image list has a number of properties to help with this for example for naming the exported files, so you can easily import them back in bulk.

The images of the SVG image list can be exported as Bmp, Png, JPeg or SVG files. The VCL and Lazarus versions also can export multi layered Windows Icons.

If you are already using an earlier version of the SVG control package, you will get some warnings about properties that are changed or maybe are removed. All the warnings should be accepted and all should be ok, but to be on the safe side, make a backup of your code including the previous version of the SVG control package before upgrading. See the change log for details.

The SVG icons used in the examples are from: https://github.com/icons8/flat-color-icons/tree/master/svg