There was a little bug in the package which prevented the proper rendering of images with transparency on the VCL TButton, so I uploaded a new fix which corrects this. After download of the fixed package you should rebuild the packages. The demo packages are update also.

In this post I would like to show how you can set properties on the TSVG2ImageList to enable transparency.

First there is the question what type of button you should select from the Tool Palette in the Delphi IDE. There is a TButton, a TBitBtn and a TSpeedButton.

It turns out that the TBitBtn and TSpeedButton are legacy controls and you should avoid using these in new applications. The illustration below shows why: 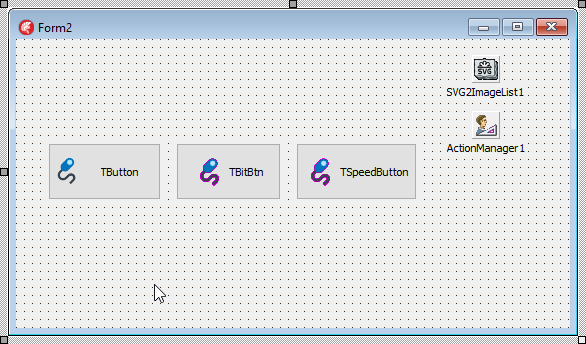 There is  a Fuchsia color border on the TBitBtn and TSpeedButton control, that is because it uses the old windows method of simulating transparency by using the left (or right, not sure) bottom pixel as a transparency color. Before it copies the image from the image list, it clears the target area with color Fuchsia. On the pixels that should be semi transparent this Fuchsia color seeps through.

In this test application linked the image list to the ActionManager1 and added a couple of actions. On each action I set the ImageIndex of the corresponding image in the SVG2ImageList. Next linked one of the Actions to TButton.

On the TButton you also have to set the “Images” property to link to an image list. Then you have the option to set a number of image index properties on the TButton to show different images depending on the state of the button.

Finally here are the properties of the TSVG2ImageList to enable transparency: